Some background on the lady who provided the bench (see photo) at the bottom of Long Causeway!  Fascinating lady.

Isabella Ford is best known for her work in the suffrage, trade union and labour movements. She believed firmly in the equality of women.

Isabella Ormaston Ford was born in 1855 into the Ford family at Adel Grange. Her father, Robert Lawson Ford, was a solicitor (now Ford & Warren in Leeds), and her mother was Hannah (nee Pease). She had two brothers and was one of six daughters, although two died in infancy.

Fords were a Quaker family and the Ford children were brought up in an atmosphere of radical liberal politics, women’s rights and humanitarian causes. Hannah Ford was an important influence on all of her daughters, including being active in the women’s suffrage movement. It is claimed that Robert and Hannah established the first nightschool in England. It was formed in Leeds for the benefit of local mill girls. One brother, J. Rawlinson Ford, became a solicitor in his father’s firm. He served as a councillor and then alderman on Leeds City Council. His wife, Helen Ford, was a member of the Yorkshire Ladies Council of Education.

The other brother, T. Benson Ford, was an engineer, but he gave up his career when he feared he would be involved in the manufacture of armaments. He became the owner of a silk-spinning mill instead.

The eldest sister was Mary, who married Richard Smith of London, but died in 1894. Emily was an artist, who specialised in church art. She painted murals in several London churches and frescos of Saints Columba, Augustine and Patrick in clergy houses in Leeds.

Emily also liked to write and recite plays in the Yorkshire dialect. She died in 1930, aged 79.

Bessie was a musician. On her death in 1919, her Stradivarius violin was sold to finance free concerts for poor people in Leeds.

Immersed in socialist and radical ideas from an early age, Isabella first came to prominence as a trade union organiser during the period of labour unrest in Leeds between 1888 and 1890. Isabella took it upon herself to find out the facts behind the weavers’ strike in September 1888. In 1889, she helped in a dispute in Alverthorpe. In October 1889 as a result of unrest among tailoresses in Leeds, Isabella called a public meeting to establish a Tailoresses’Union. The meeting was attended by Clementina Black, representing the Women’s Trade Union and Provident League, who spoke about the victory of the London dockworkers for better working conditions.  Seven hundred female machinists went on strike, and although the company claimed victory after four weeks, many strikers stayed out until the end of December. Isabella spoke at meetings, organised and distributed relief among the strikers, and publicised the women’s case in the press, and was made an honorary member of the Trades Council in 1890 for this work.

Isabella continued to work with textile workers throughout her life, including the workers involved in the Manningham Mills dispute inBradford. She emphasised the need for unity between the sexes, and attacked those who spoke of the consequences of women’s subordination in the workplace, not the causes. She believed that “women must revolt and act independently to change their own conditions”, and argued that the trade union movement was key to any change in women’s status in industry, concluding that trade unionism should be linked to women’s suffrage.

Isabella also campaigned for effective factory legislation, including the employment of female factory inspectors. As a member of the Independent Labour Party, Isabella was convinced that men and women must work together for emancipation. She also placed great emphasis on the importance of family life, and resisted idealising the role of women in the home and family. Isabella made it clear that in working-class homes, “motherhood was not always honourable and voluntary”.

With her sister, Bessie, and sister-in-law, Helen, Isabella formed the Leeds Women’s Suffrage Society in 1890. However, it was not until the early years of the 20th century that Isabella concentrated more on the campaign for suffrage. Isabella, as a Quaker, abhored violence, and so was a member of the National Union of Women’s Suffrage Societies (NUWSS). She and her sister, Emily, were vice-presidents of the Leeds Society, and Bessie was the treasurer. She was also the chairman of the West Riding Federation of Women’s Suffrage Societies. Isabella’s work for the suffrage movement took her to Londonand she was a member of the executive of the NUWSS from 1907 to 1915. As a pacifist, Isabella was not able to support the war effort in the same way as many other suffragettes. She explained her position to Millicent Fawcett as follows: “I hate Prussianism as heartily as you do – and I long for it to go – but I do not think that war ever destroyed war – and real salvation can only come to people and nations from within.”

Eventually, she resigned from the NUWSS and worked towards the campaign to bring the First World War to an end through negotiation, as well as build future international co-operation. The campaign was directed through the Women’s International League for Peace and Freedom. In her latter years, Isabella was dogged by ill-health, but her views on women remained consistent throughout. Women would only achieve emancipation if there was a change in the hearts and minds of individuals, not institutions. Women would not have economic freedom unless they had political freedom.

Most of this information is gleaned from June Hannam, Dictionary of Women’s Biography, 1987 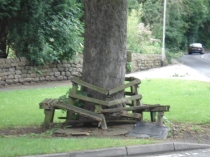 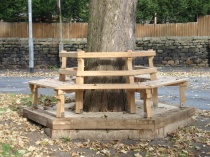 Isabella and her three older sisters Bessie and Emily were all educated at home by a governess and their mother. Apart from the usual academic subjects, they were encouraged to be creative, their mother, Hannah painted and wrote poetry. ‘The girls’ had a number of artistic accomplishments, and in her biography of Isabella, June Hannam writes ‘they ‘played musical instruments to a professional standard’. Isabella also published three novels whilst her sister Emily trained as an artist at the Slade as well as writing a number of plays. The musical side of the family is usually associated with Bessie (the owner of the violin) and a brother called John Rawlingson Ford. Bessie wasn’t a professional musician, rather shy she stayed at their home in Adel, managing the household after their mother’s death. Bessie started a series of workpeople’s concerts in Leeds whilst ‘Rawly’ was associated with the Leeds Triennial Music Festival.

As far as I know the family had no obvious Scottish connection.

I thought you might like my photo of Adel Grange, the Ford family home, where Isabella lived, & played the piano… Adel Grange is close to where I live – it is now a Nursing Home & has a Blue Plaque remembering Isabella.

Do keep us informed – we would like to feature the story about the Music Book in Adel Parish Magazine.

We are asking around Adel for more information. We produced an Adel History Play (involving the local Primary School), in Adel Church; ‘Isabella’ was one of the main characters.