Adel Crag Community Association wish to bring to your attention important information received early this week from Cllr Billy Flynn, which may be of interest to you. 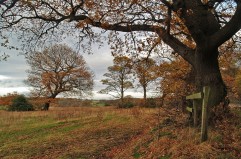 First the bad news (for most of you). Residents may have seen site notices going up towards the end of last month announcing that an outline application had been made to Leeds City Council for a major development of up to 100 dwellings with land reserved for a primary school on the site opposite the church. There are still many issues to be resolved as the proposed development does not accord with the Adopted Development Plan and it affects a right of way but at least the pressure brought by residents and English Heritage/Historic England following previous proposals has had some effect. All the proposed buildings are now on the west side of the beck leaving the fields directly in front of the church undeveloped. The proposed school playing field is the only part of the plan that intrudes on to the church side of the beck although a judgement will need to be made on the impact of the proposed development on the conservation area. I have spoken to the agent handling the development and he confirmed the change in plan was as a direct result of local objections. There are two proposed access points, from the A660 via a new junction opposite Kingsley Dr and minor access through the Centurion Fields estate off Church Lane. The internal design of roads on the proposed estate would avoid roads being connected internally to prevent rat running from the A660 to Church Lane. The proposed development will consist of up to 35 affordable dwellings and up to 65 dwellings for market sale. We are still at the consultation stage and any comments you have should be directed to The Development Enquiry Centre, The Leonardo Building, 2 Rossington St, Leeds LS2 8HD. The deadline is technically 18 November but Planning will consider contributions after that date so please be quick if you wish to comment. Please note that any comments either sent on line or in writing can be seen by anyone, no anonymous contributions will be accepted. Much more information about the application, including drawings, can be found on the council planning portal website as follows; www.leeds.gov.uk/publicaccess quoting reference 16/06222. Once officers have considered the relevant comments from consultees they expect to meet with ward councillors towards the end of November to provide us with their views on the application. Residents will be kept fully informed of developments.

Now for some better news. There were fewer crimes this month following the arrest of a burglar who is being held on remand. Most crimes in the ward took place in Bramhope involving thefts from sheds and garages. PC Karina Ingham, our ward manager, tells me that there has been an increase in scrap metal collectors coming into the area and a separate operation is being planned to deal with this issue. Be on your guard!

Speedwatch volunteers have been busy in the ward during October checking vehicle speeds on Long Causeway at the junction with Dunstarn Lane and near to the Lawnswood Arms. Results from the former location revealed vehicles speeding at the rate of one per minute while the volunteers were present. We are awaiting the results from the latter site. Karina is concerned about the excess speeds recorded and has requested that a police officer be deployed at the location with a speed gun to allow enforcement action. The police have also put up several speed awareness notices on street light columns in the ward to address the speeding issue.

If you have any queries regarding the above or anything else in the ward for that matter, please do not hesitate to get in touch with your ward councillors.

Adel Crag added: There is to be a joint meeting Adel Neighbourhood Forum and Adel Association on Thursday 17th November at 7.30pm chaired by Cllr Barry Anderson at the Old Stables back of Adel Parish Church.

The purpose is to seek residents’ views on the proposed development on the land opposite Adel Parish Church.

The agenda is available to view on the Adel Neighbourhood Forum Facebook page https://www.facebook.com/AdelNeighbourhoodForum/

Please feel free to pass on to your neighbours and relatives as it may be of interest to them.

What do you think? Cancel reply

This site uses Akismet to reduce spam. Learn how your comment data is processed.